“ Lucia is a first class talent , with a warm, powerful sound, a brilliant technique and an extreme and charming musicality”.

“The Italian dazzled a capacity crowd with absolutely flawless technique and deep musicality. Here is a newcomer to watch out for”

About the Artists
Lucia Luque Cooreman, violinist, is considered by public and critics one of the best young artists in South America. Her rapidly advancing career as a soloist and in chamber groups has led to many concert performances inArgentina, Italy, Brazil, Belgium, Germany, Switzerland, Austria, Chile, Nigeria, Uruguay, Mexico, UK, Spain, Senegal, Portugal.
Winner of numerous National and International Competitions, she won the First Prize winner in the“National Prize of Arts” in Torino. Special Prize at the prestigious “Concorso Internazionale di Violino Curci” in Napoli, she was also awarded with the “Premio Accademia Filarmonica dell’Arena” in Verona.
At the age of 14, she made her debut as a soloist in Argentina with the National Symphonic Orchestra playing Max Bruch’s Concert Nº 1. Since then she performs regularly as soloist with Orchestras among which the National Symphonic Orchestra of Argentina, Mendoza Philarmonic Orchestra, Symphonic Orchestra of Cordoba, Sinphonic Orchestra of Rosario, Orchestra Orchestra OSPA of Porto Alegre of Brazil, Orchestra Symphonic of Chile, Symphonic of Mar del Plata, Mahler Chamber Orchestra, Philarmonic Orchestra Arena di Verona, Orchestra Festival Michelangeli, Chamber Orchestra of Chile.
Lucia studied violin with Humberto Carfi and she got her diploma at the Conservatory of Music in Verona, under the tutelage of Juan Carlos Rybin. In 2009 she was selected bySalvatore Accardo to study at the Stauffer Accademy in Cremona and at the Chigiana Accademy in Siena until. In 2009 she studied also with Felice Cusano at the Fiesole School of Music in Florence.
During the years 2011/12 she studied in Berlin with Christophe Horak and Simone Bernardini (Berliner Philarmoniker). She attended masterclasses with Sergej Krylov, Ana Chumachenco, Zakhar Bron, Nora Chastain, Sonya Korkeala, Roby Lakatos, Bernard Fork, Richard Young.
Very active chamber musician and she recorded a CD with pianist Mauro Bertoli. Since 2013 she is the Concertmaster for the Cordoba Symphonic Orchestra, and she is violin Professor at the Uader University in Entre Rios.
Lucía Luque plays an Enrico Marchetti violin (Italy, Torino 1920).

Mauro Bertoli, is an Italo-Canadian pianist, who lives in Ottawa where he moved from Italy in 2009. After receiving the first prize in several International and national Piano Competitions he has established himself on the international stage and has been praised by the press for his formidable technique and exceptional sensitivity.

Invited to debut for the recognized International Piano Festival of Brescia and Bergamo, in Italy (April 2016), he has also been awarded the prestigious Arturo Benedetti Michelangeli Prize for the youth. A new addition to the Prize that since 2000 has been awarded by the above mentioned Festival and the Foundation CAB to personalities such as Pollini, Argerich, Kissin, Uchida, Lang Lang, Temirkanov, Muti, Ughi, Rostropovich, Maisky just to cite a few, and that for the first time ever has been assigned to a young pianist with an emerging international career.

“….dazzled by (the) up-and-coming pianist …with absolutely flawless technique and deep musicality…Here is a newcomer to watch out for.” – John Terauds, Toronto Star
“In the world of classical music, Italy has long been known for producing famous singers and conductors. For some reason, though, the list of renowned Italian pianists is considerably shorter
— Arturo Benedetti Michelangeli and Maurizio Pollini are among those who come to mind. However, with the release of three CDs featuring a young artist by the name of Mauro Bertoli, that list should be immediately augmented!” – Richard Haskell, The Whole Note

He won the “Giuseppe Sinopoli Award”, a prestigious Italian prize awarded personally by Giorgio Napolitano, the President of the Italian Republic.

He is currently Piano Accompanist at the Conservatoire de Musique du Gatineau and Part Time Piano Professor at Ottawa University. 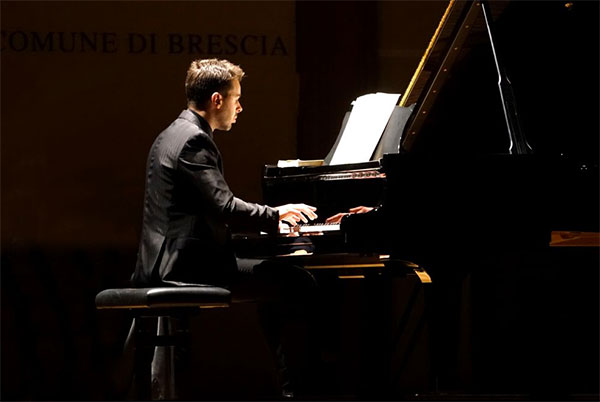