Debussy and the Impressionists
featuring

Program includes
Some of the Debussy landscape pieces, including La Cathédrale Engloutieand Reflets dans l’Eau in relation to Monet’s Poplar Trees and Nymphéas. Paul will also talk about the influence of oriental art on the Impressionist painters, especially Japanese prints (that Debussy loved and collected), and illustrate this with pieces from Image Book 2, especially Cloches à travers les feuilles. 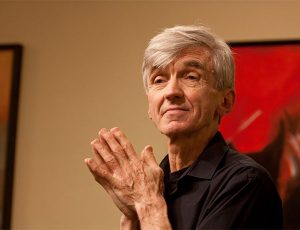 About the Artist
Paul Roberts is the artistic director of the international summer school for pianists Music at Chateau d’Aix, in southern France. In London he teaches at the Guildhall School of Music & Drama, where he has been awarded an Honorary Fellowship (FGS). His new book, Reading Franz Liszt, in which he illuminates the literary inspiration underlying many of Liszt’s major piano works, will be published in May next year
His acclaimed Reflections: The Piano Music of Maurice Ravel (Amadeus, 2012) followed two books on Debussy: a biography, Debussy (Phaidon, 2008) and Images: The Piano Music of Claude Debussy (Amadeus, 1996). Images has become a seminal text on the subject. ‘It is a complete picture of Debussy’s poetic world,’ Richard Goode has written, ‘and is one of the few indispensable books on music that I know.’
Recordings include Debussy’s Images Books 1 and 2, Préludes Books 1 and 2, and Estampes; a DVD lecture-recital Mists, Fairies and Fireworks on Debussy’s Preludes (Amadeus Press); and lectures for television, from the keyboard, of La mer and Ravel’s Bolero (Medici TV), which have been seen all over the world. Recordings of Ravel and Liszt are in the offing. ‘Roberts doesn’t play like an Englishman,’ wrote a critic for BBC Music Magazine on the release of his first Debussy disc. ‘Space, concentration and fire take their turns in this fine start to a Debussy cycle. He characterizes directly and, at speed, fiercely. In slower music there is unhurried poise and fluidity.’
Among extensive appearances throughout the United States Paul Roberts has been a guest of the Juilliard School in New York, the Peabody Institute, the Golandsky Institute, San Francisco Conservatory of Music, the University of Washington and Portland Piano International. He has presented at the International Keyboard Institute and Festival in New York. He plays regularly and gives master classes in Sweden, Denmark, France, Spain, Singapore and Australia. In London he has made frequent appearances at the Wigmore Hall and has recorded for the BBC.
Register here in advance for this event

Paul Roberts’ excellence as a writer on music is matched by his superb talents as a pianist. I know of no other figure in the musical world who combines so impressively the roles of scholar and performer.—Richard Goode