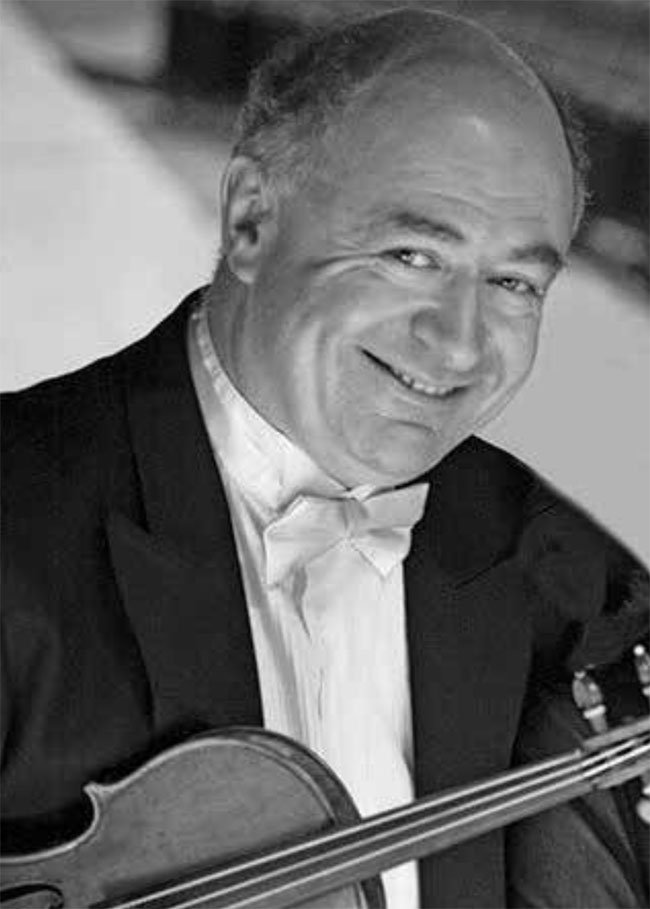 lya Kaler is one of the most outstanding personalities of the violin today, with a career ranging from that of soloist and recording artist to chamber musician and professor. He is the only violinist in the world to win the Gold Medal at three of the world’s most prestigious international violin competitions: the Tchaikovsky Competition in Moscow (1986), the Sibelius Competition in Helsinki (1985), and the Paganini Competition in Genoa (1981).

Praised by Gramophone magazine as “the magician, bewitching our ears,” Kaler has earned rave reviews for his solo appearances with distinguished orchestras such as the Leningrad, Moscow, and Dresden Philharmonic Orchestras, the Montreal Symphony, the Danish and Berlin Radio Orchestras, the Moscow and Zurich Chamber Orchestras, and most major American orchestras. He has collaborated with a number of outstanding conductors, including Valery Gergiev, Dmitri Kitayenko, Mariss Jansons, and Jerzy Semkow. Kaler’s solo recitals have also taken him to five continents, where he received enthusiastic reviews.

Kaler performs across the globe as a member of The Tempest Trio with cellist Amit Peled and pianist Alon Goldstein, a constellation of internationally acclaimed soloists. The trio recently released their debut album for Naxos Records, featuring the complete set of piano trios by Antonin Dvorák. His musical versatility extends to the symphony orchestra, as well, and he has appeared as guest Concertmaster with the Philadelphia Orchestra, the San Francisco, Pittsburgh, and Baltimore Symphonies, and on tour with the World Orchestra for Peace under Valery Gergiev. Kaler also held the Concertmaster position with the Rochester Philharmonic Orchestra in New York.

He received his education at the Moscow Central Music School under Zinaida Gilels and at the Moscow State Conservatory under Leonid Kogan and Victor Tretyakov. Further influence and inspiration came from his long-time mentor, superb violinist and pedagogue Abram Shtern.

Kaler records for Naxos Records and Ongaku Records. His highly acclaimed albums include Sonatas by Schumann and Brahms, Concertos by Paganini, Shostakovich, Tchaikovsky, Brahms, Schumann, Dvorák, Glazunov, Szymanowski, and Karlowicz, as well as the Taneyev Concert Suite, J.S. Bach’s Sonatas and Partitas for Solo Violin, Ysaÿe’s Six Sonatas for Solo Violin, and an album of works for solo violin. 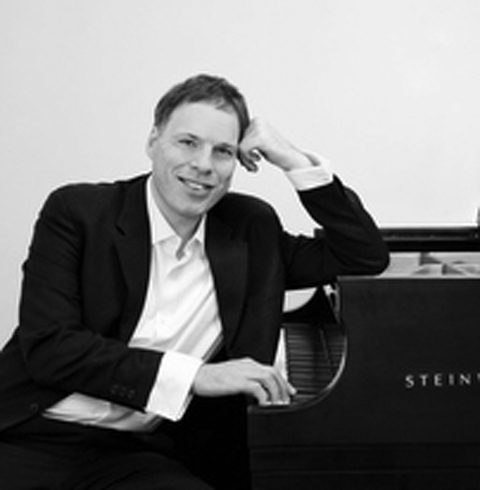 Alon Goldstein is one of the most original and sensitive artists of his generation, admired for his musical intelligence and dynamic personality. Alon’s artistic vision and innovative programming have made him a favorite with audiences and critics alike throughout the United States, Europe, and Israel. He made his orchestral debut at the age of 18 with the Israel Philharmonic under the baton of Zubin Mehta and returned a few seasons ago with Maestro Herbert Blomstedt in Beethoven Concerto No. 1. In recent seasons, Mr. Goldstein has performed with the Los Angeles Philharmonic; Philadelphia Orchestra; the San Francisco, Baltimore, St. Louis, Houston, Vancouver, Kansas City, Indianapolis, and North Carolina Symphonies; and orchestras on tour in Paris, Russia, Romania and Bulgaria.

His 2018-19 season includes appearances with the Kansas City, Ann Arbor, Illinois, Spokane, Bangor, Augusta, and Pensacola Symphony Orchestras, as well as a performance of the Beethoven Emperor Concerto on fortepiano with Mercury Houston. Recital and chamber music performances, including tours with the Goldstein-Peled-Fiterstein Trio, will take him to Cleveland, Shreveport, Burlington, Key West, Sarasota, Melbourne, Duluth, and other cities. His 2018-19 season will also include the release of Mozart Piano Concerto Nos. 23 and 24 with the Fine Arts Quartet (a follow-up to their critically acclaimed recording of Nos. 20 and 21) and Scarlatti Piano Sonatas on the Naxos label.

In 2017-18 he performed with the Indianapolis Symphony as part of a Prokofiev Concerto cycle, a Mozart Double Concerto in a return to the Gilmore Festival, as well as concertos with the Rhode Island Philharmonic, Cincinnati Chamber Orchestra, Atlantic Classical Orchestra, Jerusalem Symphony, George Enescu Philharmonic, Xalapa Symphony, and the Haifa Symphony Orchestra, among others. 2017-18 also saw the release of Dvorak Piano Trios, Vol. 2 with the Tempest Trio on Naxos. A passionate advocate for music education, his recent teaching engagements have included posts at The Steans Institute of the Ravinia Festival and The Gilmore International Keyboard Festival, in addition to extended educational residencies across the country.

The past few seasons included the release of Mr. Goldstein’s acclaimed Centaur recording of Mendelssohn Concerto Nos. 1 and 2 with the Israel Chamber Orchestra conducted by Yoav Talmi, which was preceded by an enthusiastically received 17-concert Latin American tour with the Israel Chamber Orchestra. Other highlights included an appearance as soloist with the Chicago Symphony at Ravinia in the Mozart Double Concerto, K. 365 with Katherine Jacobson Fleisher as well as in the Triple Concerto, K. 242 with Leon Fleisher and Ms. Jacobson Fleisher. A few months earlier, he appeared at the prestigious Ruhr Piano Festival in Germany performing the Britten Diversions and the Poulenc Double Concerto with Mr. Fleisher, his former teacher, conducting.

Among many memorable recent experiences was the premiere Lost Souls with the Kansas City Symphony and Michael Stern written for him by the noted young Israel composer Avner Dorman;his successful debut with the London Philharmonic Orchestra and Vladimir Jurowski playing Mendelssohn Concerto No. 1, a return to the IRIS Orchestra for Saint-Saëns Concerto No. 2 with Michael Stern, performances of Tchaikovsky Concerto No. 1 with Jaime Laredo and the Vermont Symphony and Concerto No. 2 with the Toronto Symphony.   He was also heard in Paris with the Orchestre Philharmonique de Radio France with Leon Fleisher conducting. He made his Carnegie Hall debut in the Mozart Triple Concerto with Joseph Kalichstein and Shai Wosner, as well giving the world premiere of a concerto by Mark Kopytman with Avner Biron and the Jerusalem Camerata Orchestra.

Mr. Goldstein has appeared at the Gilmore, Santa Fe, Tanglewood, Ravinia, Marlboro, Seattle, and Steamboat festivals in the United States as well as Prussia Cove the Verbier Festival and Klavier Festival in Rühr. He performed at the Hollywood Bowl with the Los Angeles Philharmonic and Millennium Park in Chicago with the Grant Park Symphony Orchestra. Over the past several years he has also taught and played at the “Tel Hai” international piano master classes held in Israel.

Mr. Goldstein serves as the Artistic Director for The Distinguished Artists Concert & Lecture Series in Santa Cruz, CA and was recently named the Artistic Director for the Mt. Angel Abbey Bach Festival in Oregon, starting in 2019. He also recently created the Emerald Coast Music Alliance, whose annual festival in Florida is devoted to sharing the beauty of classical music to under-served communities, free of charge.

He is the winner of numerous competitions, among them the Arianne Katcz Piano Competition in Tel Aviv, Nena Wideman Competition in the US and the Francois Shapira competition in Israel. He is also the recipient of the 2004 Salon di Virtuosi Career Grant and the America Israel Cultural Foundation Scholarships. The Phillips Collection in Washington, DC chose a live recording of one of Mr. Goldstein’s recitals there for its first CD release.  Other recordings include solo recital programs through the Jerusalem Music Center “Mishkenot Sha’ananim” and the Israeli Music Institute featuring works by Israeli composers. Mr. Goldstein graduated from the Peabody Conservatory where he studied with Leon Fleisher and served as his assistant – a position assigned only to his most exceptional students.

Please visit Alon Goldstein online at alongoldstein.com and on Facebook (@alongoldsteinofficial) for additional information about touring, recordings, and special projects. His most recent recordings appear on the Naxos and Centaur labels.