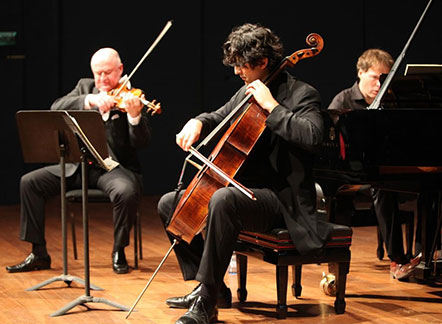 Alon Goldstein, the pianist of the Tempest Trio, is one of the most original and sensitive pianists of his generation, admired for his musical intelligence, dynamic personality, artistic vision and innovative programming. His orchestral debut took place when he was 18 with the Israel Philharmonic under Maestro Zubin Mehta; in April of 2008, he returned with Maestro Herbert Blomstedt. Since then, Maestro Goldstein has performed in Los Angeles, Philadelphia, San Francisco, Baltimore, St. Louis, Houston, Vancouver and Kansas City. Abroad, Maestro Goldstein has collaborated with orchestras in Paris, Russia, Romania and Bulgaria.

Maestro Goldstein’s most recent debuts include his Carnegie Hall appearance in the Mozart Triple Concerto with Joseph Kalichstein and Shai Wosner, his successful performance with the London Philharmonic Orchestra and Vladimir Jurowski, and playing with the Orchestre Philharmonique de Radio France, conducted by Leon Fleisher. His recital and chamber music concerts in Beijing, Guatemala City, Kent (UK), Chicago, Jerusalem, and Tel Aviv were all highly acclaimed.

As a recording artist, Amit recently released his fourth Centaur Records CD, “Collage” which will be closely followed by his recording of the Schumann Cello Concerto with the Washington Chamber Orchestra. These records follow three immensely successful installments, “The Jewish Soul,” “Cellobration,” and “Reflections.” As an active chamber musician, Peled is a founding member of the famed Tempest Trio with pianist, Alon Goldstein and violinist, Ilya Kaler. Their Dvorak CD on Naxos has been described as “The best ‘Dumky’ on disk ever!”

Ilya Kaler, the only violinist to win Gold Medals at three highly prestigious competitions — The International Tchaikovsky Competition (Moscow, 1986), The Sibelius (Helsinki, 1985), and the Paganini (Genoa, 1981), has received enthusiastic reviews for both his distinguished solo performances and highly acclaimed recordings, now available on Naxos label.

From the United States to Europe to the Middle East and Asia, Israeli cellist Amit Peled, a musician of profound artistry and charismatic stage presence, enjoys global presence as both one of the most acclaimed cellists on the concert stage and one of the most profound pedagogues today. Maestro Peled has performed as a soloist with many orchestras and in the world’s major concert halls such as Carnegie Hall and Alice Tully Hall, New York; Salle Gaveau, Paris; Wigmore Hall, London; Konzerthaus, Berlin; Tel Aviv’s Mann Auditorium, and many more.

Maestro Peled has been featured on television and radio stations throughout the world, including NPR’s “Performance Today,” WGBH Boston, WQXR New York, WFMT Chicago, Deutschland Radio Berlin, Radio France, Swedish National Radio & TV, and Israeli National Radio & TV. Maestro Peled, aside from his concert performances, teaches as a Professor at the Peabody Conservatory of Music of the Johns Hopkins University.

Be sure to catch Alon Goldstein, Ilya Kaler, and Amit Peled during the Tempest Trio’s performance on February 16th, 2019.

“…a consummate musician, in total control at all times, with a peerless mastery of his violin.”
– The Washington Post

“…in a class by themselves … [combining] the perfection, passion, and phrase-sculpting of Michael Rabin with the energy, excitement, and immediacy of Jascha Heifetz.”
– American Record Guide, on Kaler’s Paganini Caprices album

“By all evidence, Amit Peled is a superb cellist. His technical prowess in the Davidoff and Ligeti vouchsafe that; and his tone, of pellucid purity, gleams with a glint of gold in the slow, lyrical numbers.”
– Fanfare Magazine

“… a warm, glowing tone. He seized the moment, playing with a seductive timbre and an emotionally pointed approach to phrasing that made you want to hear him again…”
– The New York Times