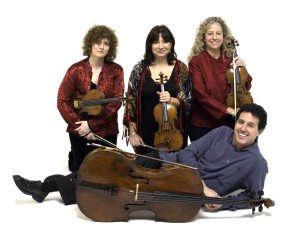 This performance is dedicated to the memory of Paul Audie, ardent lover and supporter of classical music in our community.

The Quartet has established a reputation for passion, precision, and provocative programming, winning accolades for playing that shows both super-refinement and visceral, rock-and-roll intensity.The Ives Quartet presents an annual home concert series in Silicon Valley and the Greater San Francisco Bay Area in addition to performing nationally and internationally at noted chamber music series and festivals.

The Ives Quartet has captivated audiences from San Francisco to New York; London to Taiwan. In a departure from convention, the Quartet combines players with American and European experience and sensibilities, drawing on the talent and experience of the international, solo, orchestral, chamber, and recording careers of its artist members – Bettina Mussumeli, violin; Susan Freier, violin; Jodi Levitz, viola; and Stephen Harrison, cello.

The quartet members share a strong commitment to the special challenges of the string-quartet literature and its performance. This value is expressed in the Quartet’s open-minded and critical engagement with the personal and private worlds of composers, exploration of the unique languages of string-quartet composers, and the introduction and immersion of audiences in these languages with carefully curated concert presentations. 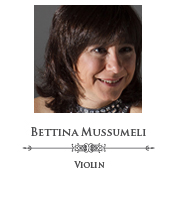 Bettina Musumeli began her violin studies at age eleven. At thirteen she was accepted as a scholarship student at the Juilliard School, Pre-College Division. She received her Bachelor and Master of Musical Arts degrees from Juilliard, also on full scholarship. She has studied with such eminent teachers as Dorothy Delay, Ivan Galamian, Paul Doktor, and Kato Havas, as well as chamber music with members of the Juilliard, Guarneri and Cleveland Quartets.

Her numerous solo and chamber music recordings include works of Corelli, Mendelssohn, Pergolesi, Schoenberg, Rolla and Vivaldi for the Agora, Erato, Concerto, and Tactus labels. She has been professor of violin at the San Francisco Conservatory of Music since 2001. 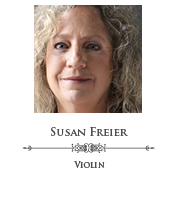 After earning degrees in Music and Biology at Stanford University as a Ford scholar, Susan Freier decided to pursue an advanced degree at the Eastman School of Music. In her first year there she was asked to join three friends to form the Chester String Quartet and enter the Cleveland Quartet competition. The Chester won, working intensively with the Cleveland Quartet at Eastman and the Aspen School of Music, and went on to win the Evian, Munich International, Portsmouth (England) and Chicago Discovery competitions.

Immediately after leaving Eastman, the Chester became faculty ensemble-in-residence at Indiana University at South Bend. In 1989 Susan returned to her native Bay Area to join the Stanford University faculty and the Stanford String Quartet. She has been a participant at the Aspen, Grand Teton and Newport Music Festivals, and has performed on NPR, the BBC and German State Radio. Her recordings are on the Newport Classics, Stolat, Pantheon, Laurel, Music and Arts, and CRI labels. Formerly an artist-faculty member at the Pacific Music Festival, Music in the Mountains at Steamboat Springs and the Rocky Ridge Music Center, she now teaches and performs at the Orfeo Music Festival (Italy) and the San Diego Chamber Music Workshop. 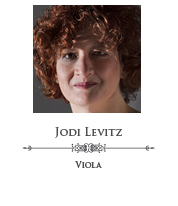 Professor of Viola and Chamber Music at the San Francisco Conservatory of Music, Jodi Levitz was principal viola and soloist with the Italian chamber group “I Solisti Veneti” for twelve years, a position she was offered while still a student at the Juilliard School. She has performed as soloist throughout Europe, South America, the USA and the Far East, and recorded works of Cambini, Giuliani, Hummel, Mendelssohn, Rolla, Schoenberg and Schubert on the Concerto, Dynamic, and Erato labels. She was the principal violist of the Chamber Orchestra of Mantova and the Orchestra Città di Ferrara, and collaborated as guest principal viola with the National RAI Orchestra, the Orchestra Toscanini of Parma, and the Chamber Orchestra of Tuscany.

She has served on the faculties of the Ars Musica Academy at Imola, Progetto Orchestra, numerous European summer festivals, and is the co- founder of the Italian summer music festival “Musica Lozzo”. Ms. Levitz attended the Juilliard School, Pre-College Division from the age of twelve, and also received her Bachelor and Master of Musical Arts degrees from Juilliard. Her principal teachers include Margaret Pardee, Paul Doktor, William Lincer and Dorothy DeLay. She serves on the board of the San Francisco Friends of Chamber Music. 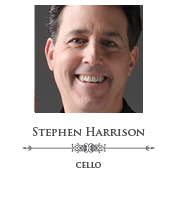 String quartet cellist Stephen Harrison has been on the Stanford University faculty since 1983. He is a graduate of Oberlin College and Boston University, where he received the Award for Distinction in Graduate Performance. Former principal cellist of the Opera Company of Boston, the New England Chamber Orchestra and the Chamber Symphony of San Francisco, he has performed on National Public Radio, the BBC, and on both German State Radio and the Netherlands State Radio.

As solo cellist of the San Francisco Contemporary Music Players, he has toured internationally and recorded on the Delos, CRI, New Albion and Newport Classics labels. He has also performed on both the “Music of the Sacred and Profane” and New and Unusual Music Series presented by the San Francisco Symphony, and for Chamber Music West. Mr. Harrison has been on the faculty of the Pacific Music Festival and is currently an artist/faculty member of the Rocky Ridge Music Center.