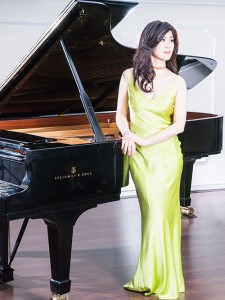 Ms Gwhyneth Chen (陳毓襄) is a Taiwanese-American pianist who in 1993, won the biggest cash prize in the history of piano competitions, ($100,000.00.) Ms. Chen, then a young lady of 23, was the youngest contestant at the Ivo Pogorelich International Piano Competition. Subsequent to the award, Mr. Pogorelich himself said of her talent, “She is too good to be true.” Immediately recognized as one of the foremost pianists of her generation, the victory was broadcast internationally on CNN television. In recent years she has played joint concerts with Ivo Pogorelich in Switzerland and in Taiwan.

Born in Taiwan, Ms Chen emigrated to the United States with her family in 1980, where she continued her musical studies with Eduardo Delgado, Robert Turner, and Aube Tzerko. She received her Bachelor and Master of Music degrees from the Juilliard School. While in New York, her teachers were Martin Canin, Byron Janis and Yin Cheng-Zong.

At the age of 12, she was the first prize winner of the 50-state National Piano Competition, sponsored by the Music Teacher’s National Association. Three years later she won the National Competition again, setting a record by winning in both Junior High and the Senior High Competitions.

A leading Chinese musical figure, Gwhyneth Chen was included in the 1995 edition of the One Hundred Most Successful Chinese People and appeared in a nationally televised gala concert at the Presidential Palace in the presence of President Lee of Taiwan. In 2002, she was invited to perform and speak in Washington DC during the First Lady Wu Shu-chen’s, Peace Journey to the United States. In 2008 she performed at the inaugural festivities for the newly elected President of Taiwan, Ma Ying-jeou.

Ms. Chen represented her country with the Taipei Symphony Orchestra under the direction of Lu Shao-chia, as “the Pride of Taiwan” in the opening concert in the National Grand Theatre (“Steel Egg”) in Beijing, China, to celebrate the 2008 Olympics.

Ms Chen has appeared as a soloist with a number of orchestras, including the Los Angeles Philharmonic, Hong Kong Philharmonic, Moscow Radio Symphony, Greenville Symphony, Bergen Philharmonic, Kyushu Symphony of Japan, Taiwan National Orchestra, Shanghai Symphonic, Moscow State Philharmonic, Pasadena Symphony, Pacific Symphonic, Aspen Music Festival Orchestra, Taipei City Symphony, Fort Worth Symphony, Orchestre Fresnes, Zagreb Philharmonic, and Lake Placid Symphonietta. She was engaged to play with the Miami Symphony for six consecutive seasons. Ms Chen has collaborated with David Atherton and the Hong Kong Philharmonic on a tour of the United States and Canada, with Vladmir Fedoseyev and the Moscow Radio Symphony throughout North America and Mexico, and completed a tour of Taiwan with the Russian Philharmonic under Vladimir Ponkin. For the extravagant debut of the New Colorado Symphony, she was chosen as the first soloist performing the Tschaikovsky First Piano Concerto before a crowd of 15,000 at the McNichols Stadium.

In 1994, Gwhyneth Chen made her recital debut in Munich at Herkulessal, followed by a recital tour of Croatia and Spain. That same year, she played the opening concert of the season in the Great Hall of the Moscow Conservatory with the Russian National Orchestra under Mikhail Pletnev performing the Rachmaninoff Third Piano Concerto. In 1999, she made her New York debut at Alice Tully Hall of Lincoln Center.

A frequent benefactor of charitable events, Ms. Chen performed a successful benefit concert for the 2011 Japan Disaster Relief in collaboration with Buddhist Tzu Chi Organization of Northern California. She has donated her talents to concerts for the Fountain Project of Northern California, the American Cancer Society and the City of Ten Thousand Buddhas, and the Dharma Realm Buddhist Association’s branches.

Ms. Chen currently resides in both Los Angeles and Taipei.

Gwhyneth Chen is a Steinway Artist.