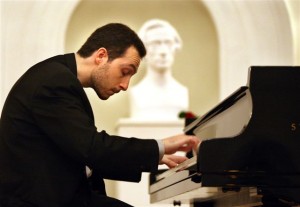 He has collaborated with leading conductors including Hans Graf, James Conlon, Miguel Harth-Bedoya, and Keith Lockhart, performing with the Houston Symphony, Colorado Symphony, Berliner Symphoniker, Orchestre National de Paris-Radio France, National Orchestra of Ukraine, Fort Worth Symphony, among many others.

He has recorded 17 CDs for Centaur Records: the Josef Rheinberger Piano Sonatas; the entire piano output of Edward Grieg, in 12 volumes; an all-Rachmaninoff CD; an all-Schumann album; a live recital in Cleveland; and the first volume of the Hummel Piano Sonatas.

Soon-to-be-released by Centaur is the second volume of the Hummel Sonatas.

Mr. Pompa-Baldi was recently recorded live in recital at the Stellenbosch Conservatory, South Africa, in a program including, among others, the complete set of Chopin’s Etudes Op.10. This CD will soon be released by the TwoPianists label.

For the Steinway label, Pompa-Baldi recorded a disc of songs by Francis Poulenc and Edith Piaf, arranged for solo piano, to commemorate the 50th year of the passing of both French musical icons. The album, titled “The Rascal and the Sparrow: Poulenc meets Piaf”, released in September 2013, received unanimous praise in Classical Music’s most esteemed review sites.

Mr. Pompa-Baldi has been seen and heard many times on French National Television, Radio-France, Ukrainian National Television, Cleveland’s WCLV, Boston’s WGBH, and National Public Radio’s “Performance Today”. He was featured in the PBS documentary on the Eleventh Van Cliburn International Piano Competition “Playing on the Edge”, which premiered in October 2001 in USA and Canada.

Mr. Pompa-Baldi appeared again on PBS in the documentary “Concerto: A sense of Self”, featuring his performance of Prokofiev’s Third Piano Concerto with the Fort Worth Symphony Orchestra and James Conlon. This performance was also seen on French National Television in May, 2003, to commemorate the 50th anniversary of Prokofiev’s death, as well as throughout Europe.

Antonio Pompa-Baldi is a Steinway Artist. He serves as Distinguished Professor of Piano at the Cleveland Institute of Music, and gives master- classes around the world, both in conjunction with his performing engagements, and at summer festivals including Piano Fest in the Hamptons, TCU-Cliburn Institute, Southeastern Piano Festival (University of South Carolina School of Music), Paisiello Academy (Lucera, Italy), Amalfi Coast Festival, and Napolinova Academy (Naples, Italy). He helped found the Academia Manuel Rueda in Santo Domingo, where he also gives regular masterclasses.

He is often invited to judge international piano competitions, and has served as president of the jury for the San Jose International Piano Competition, CA since 2006. His students have been prizewinners in important competitions such as Marguerite Long, Hilton Head, JoseÌ Iturbi, Isang Yun, and Gina Bachauer.

Mr. Pompa-Baldi invites his audience to interact with him and “like” his page: www.facebook.com/pompabaldipiano